A growing number of medical studies confirm that Kirtan Kriya (KK) meditation is not only a stress management tool, but can also aid in the treatment of cognitive impairment, memory improvement and, as a result, it plays a role in Alzheimer’s Disease Prevention1. KK has also been proven to improve sleep, reduce depression, reduce anxiety, activate immune system genes2, and even increase telomerase3. Therefore, it is obvious that we paid our attention to Kirtan Kriya benefits for a reason, since it has already passed a rigorous randomized controlled trial (RCT) design. So, its effectiveness has been confirmed experimentally. We will start by telling you more about the research carried out. Hopefully, after reading this, some of you will make this wonderful practice a part of your healthcare plan.

There are many studies proving that yoga practices are increasingly shown to be effective for the treatment of age-related cognitive issues.

Let us start with a 2017 12-week study that tested the effects of kundalini yoga training on mild cognitive impairment (MCI)4. What makes this study interesting is that the results of yoga practice were compared with the results of training to improve memory MET.

MET was developed by researchers within the UCLA Longevity Center. It is well studied and has become a gold standard intervention for cognitive training. At the same time, improvement in memory with MET training is observed in both healthy people and people with cognitive problems5. Thus, MET provides a rigorous control for KY meditation.

It also needs to be noted, that cognitive decline is a strong predictor of Alzheimer’s disease leading to dementia6. Therefore, the research can be very important for the prevention of this serious disease.

Influence at Telomere Length and Activity

As alternative Treatments for Depression

How to do Kirtan Kriya Practice

The trial participants were gathered among the people ≥55 y.o. with a mild cognitive impairment. To assess the impact of training, 2 different groups were created. So, part of the people randomly got into a 12-week program on kundalini yoga (KK). All others were involved in the MET memory improvement training, which we wrote about above.

In addition, all program participants were administered extensive tests assessing their cognitive abilities. Researchers assessed their verbal and visual memories, visual-spatial skills, individual executive, and executive functions. People were also tested for depression, present symptoms of apathy, and psychological resilience to stress. You can also take these tests on our website or by downloading👇 the app.

The participants of the experiment passed such testing several times. The tests were passed at baseline (pre-intervention) and repeated at 12 and 24 week post-intervention.

Let’s say a few more words about what exercises were performed in the yoga group. First, once a week the participants would hook up for a 60-minute kundalini lesson. In addition, all participants were required to do a 12-minute Kirtan Kriya meditation daily.

As a result of the experiment, both groups had significant improvement in memory. However, the yoga team additionally showed a broader effect on executive functioning, with greater improving in their mood7. In addition, such positive dynamics persisted after the end of the training. Impressive, isn’t it?

A similar RCT was conducted in 20168. Here the results of the meditation group were compared with the machine learning program. The researchers came up with the same result. Kirtan Kriya meditation can help people with early memory loss. It is worth mentioning that the participants practiced the 12 minutes kirtan kriya meditation only. And this is only 12 minutes a day at home and at a convenient time.

Interestingly, Khalsa and Newberg showed cerebral blood flow changes during the practice of KK910. Thus, there was observed a significant increase in cerebral blood flow (CBF) within the frontal lobe and right superior parietal lobe. Moreover, the posterior cingulate gyrus (PCG) is also activated. All this suggests that such activation of the brain with increased blood flow may have a beneficial effect or provide protection against neurodegeneration11. However, a larger study is needed to confirm this conclusion.

And finally, Luders’s study concluded that someone who practices meditation regularly, has a 7.5 years younger brain12.The age was calculated as BrainAGE index. It was also found that with every passing year, meditators’ age reduced. Thus, the researchers concluded that meditation helps maintain the brain and its activity in good shape.

Various studies have shown that Kirtan Kriya markedly improves mood, reduces anxiety, tension, and fatigue. There was also a significant improvement in depressive symptoms and mental health. And this effect was observed both in healthy people13, so in people with memory loss14. It is worth mentioning that the latter participated in the 8-week Kirtan Kriya meditation program.

Studies have also shown that 8 weeks of KK helped in alleviating worry15 and soaring positive mood and energy. In addition, a majority of patients found the sessions relaxing, calming, peaceful, and uplifting.

In the same way, sleep disruption has negative effects on health, performance, and quality of life. It is also known to impair cognitive function in healthy people16, to accelerate cognitive decline17, and to predict incident MCI and dementia18. In addition, sleep disturbances can generate glucose intolerance, obesity, and hypertension19. And finally, sleep impairment has likewise been linked to increased risk for type 2 diabetes and some other diseases. 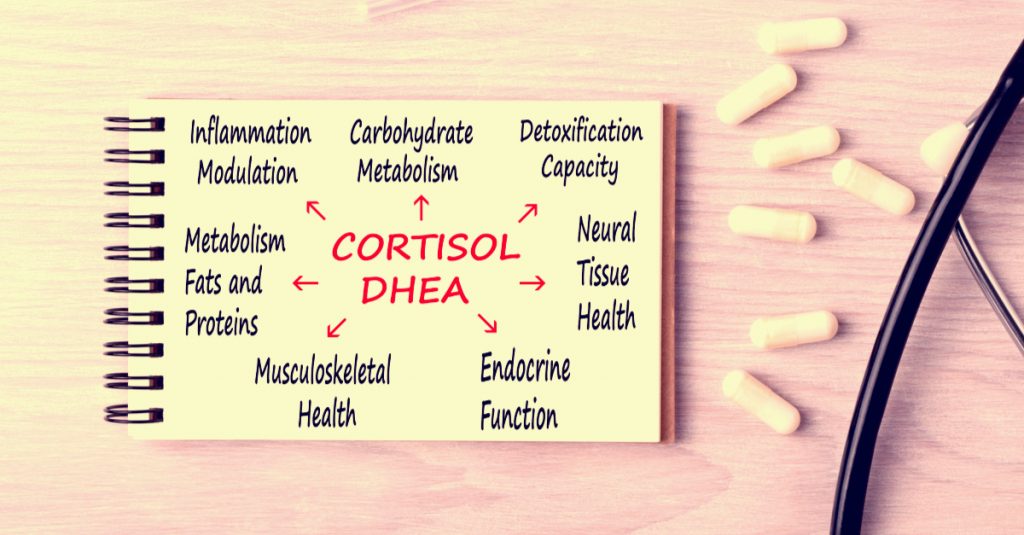 A complex interaction between cortisol and dehydroepiandrosterone-sulphate (DHEA-S) is crucial in the stress system balance. In particular, significantly higher or ...

A growing number of medical studies confirm that Kirtan Kriya (KK) meditation is not only a stress management tool, but ...

Vitamin D deficiency affects people of all ages. Last time we analyzed in detail how a deficiency of this vitamin ...

That being said, research shows that an 18-week 12-minute daily meditation program may be effective in reducing stress and improving sleep and mood2021.

Influence at Telomere Length and Activity

Research supported by the Alzheimer’s Research and Prevention Foundation (ARPF), and by the National Institutes of Health22 published the results of a study on the effect of two 12-week Kirtan Kriya meditations on telomere length (TL), telomerase activity (TA), and plasma amyloid-β(Aβ) levels (biomarkers of cellular aging). In addition to biomarkers, the researchers also assessed cognitive function and psychosocial status. For this, an assessment was carried out at baseline, after 3 months and 6 months.

So, during the experiment, all participants were randomly divided into 2 groups. Thus, one part of the people joined a group of the 12-minute Kirtan Kriya (KK). The second group of people joined the music listening (ML) program. They were instructed to listen to 12-minutes of relaxing instrumental music each day. The ML CD contained selections from Bach, Beethoven, Debussy, Mozart, Pachelbel, and Vivaldi. They were asked to try each composer at least once in 12 weeks.

As a result, the KK group showed a significantly greater increase in Aβ40 than the ML group. At the same time, the activity of telomerase TA increased in both groups. Increases in plasma Aβ levels were significantly correlated with gains in memory and cognitive function. There was also an improvement in mood, stress, sleep, and QOL.

A similar conclusion was also reached in a study of the effect of meditation on family dementia caregivers23. First, the practice of Kirtan Kriya resulted in improved mental health and decreased depressive symptoms. Second, this improvement was also associated with increased telomerase activity. This indicates an improvement in stress-induced cellular aging. However, these findings will need to be replicated in a larger sample.

As alternative Treatment for Depression

Depression is one of the most common mental illnesses in the world. In its turn, researchers are studying yoga as an alternative and complementary treatment for depression. As a rule, yoga is usually combined with other treatments for depression, anxiety, and stress-related disorders. Studies, in turn, support this approach, for example, with antidepressant treatment (Janakiramaiah et al., 2000.

However, research Shahidi et al. (2011)24showed that yoga itself is a fairly effective tool, at least as effective as a group exercise program in improving depression. How significant is this improvement?

The study of 2017, which we’ve already written above25 revealed a significant improvement in a depressive mood.

To assess mood, the researchers used the Geriatric Depression Scale (GDS). This scale is widely used among the elderly. As a result, the KY group showed significant improvements in depression ratings (GDS: ES (KY) = -0,62).

How to do Kirtan Kriya Practice

So, in all studies, Kirtan Kriya was used as a home exercise. What does it look like? In fact, KK meditation involves repetitive finger movements while chanting the mantra “Saa, Taa, Naa, Maa”, which means “Birth, Life, Death and Rebirth.” Although kirtan kriya can be of various durations, 12 minutes-one was used in the studies. So, below we will describe the technique in detail.

To start the practice, sit on a chair or on the floor and relax. You need to find a comfortable sitting position with a straight back. Straighten your shoulders, straighten your neck and back.

To start the lesson, you need to take a comfortable sitting position with a straight back. You can sit cross-legged or just sit on a chair. Straighten your shoulders, straighten your neck and back.

As we wrote above, KK uses the sounds Saa, Taa, Naa, Maa. Sing “Saa, Taa, Naa, Maa” while also performing the movements with the fingers of both hands (as shown in the picture above). Wherein, follow the next sequence:

It is convenient to use a ready-made audio recording, where the out loud / whisper / silent transitions are already timed. If outside thoughts intrude, simply return your focus to the sounds and visualization.

The sound is visualized coming down from the top of the head, and out the middle of the forehead (the third eye).