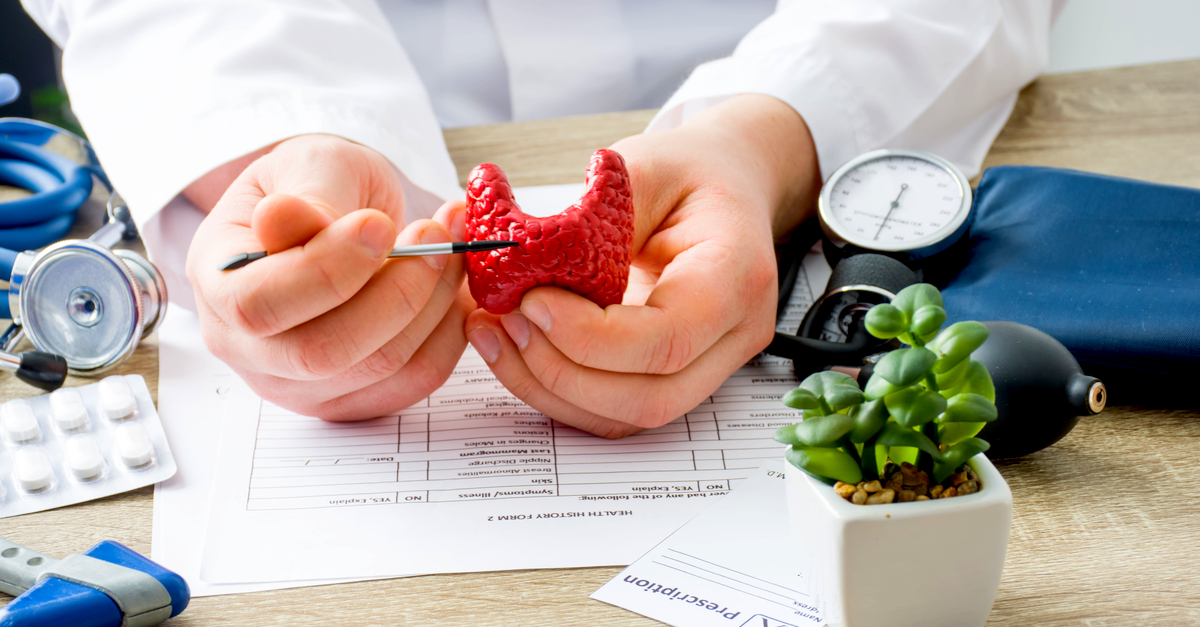 All hormones in our body must work in concert to maintain optimal health. Thyroid gland hormones play a major role in regulating this work. In today’s article, we will discuss which symptoms can tell us that not everything is in order with our thyroid hormones. We will also take a closer look at the three ways to check the functioning of the thyroid gland.

If we look into history, we will see that thyroidology itself (the study of the thyroid gland) is a relatively new field of endocrinology. In spite of this fact, however, as early as in 1600 BC Chinese writers described the treatment of thyroid goiter (an enlarged thyroid gland) with burnt seaweed1. However, the goiter itself was not specifically associated with the thyroid gland. It was only in 1656 that Thomas Wharton first gave the thyroid the name that is still in use today.

Thyroid hormone is the main regulator of hormonal levels. Many people do not realize that they have a dysfunction of the thyroid gland even though it is a disorder, every tenth2 of which, leads to many adverse health changes.

In this case we are talking about already diagnosed problems. However, according to the American Thyroid Association, up to 60 percent of people with thyroid disease go undiagnosed3. And an undiagnosed illness can put patients at risk of getting some serious illnesses. How do thyroid hormones affect our body?

The role of the pituitary gland

Thyroid gland hormones have a permissive effect on catecholamines. Catecholamines are a group of similar hormones produced by the adrenal medulla. Those, in turn, increase the expression of beta-receptors to increase heart rate, stroke volume, cardiac output, and contractility4. Often, people with hypothyroidism have very high cholesterol levels (350 and higher), and a bunch of other risk factors leading to a cardiovascular disease5.

Thyroid hormones are responsible for thermoregulation, which is why people with reduced thyroid function (hypothyroidism) often complain that they are constantly cold. This happens due to increased available energy in the body, as well as increased appetite, heart rate, and the amount of oxygen delivered to various parts of the body.

These hormones also help control the basal metabolic rate (the rate at which calories are burned). So fatigue and excess weight are also signs of hypothyroidism. On average, an underactive thyroid gland can add 5 to 15 kg of weight. But most of that extra weight will come from water and salt. In addition, decreased thyroid function can cause constipation6, memory problems, and lethargy.

An overactive thyroid gland (hyperthyroidism) is characterized by the opposite signs: having difficulty gaining weight, feeling hot, having frequent bowel movements, feeling nervous, and having a rapid heart rate. Other functions controlled by thyroid hormones include metabolism of fats, proteins and carbohydrates, as well as protein synthesis.

Relation to other hormones

There is also an interrealtion between thyroid function and control over other hormone levels. So, deviation of the thyroid hormone level from the norm can adversely affect the work of the adrenal glands. For instance, сertain human autoimmune conditions can destroy both the thyroid gland and adrenal cortex resulting in combined hormone deficiencies7. Moreover, dysfunction of the thyroid gland negatively affects the levels of sex hormones. Hyper- and hypothyroid men have increased rates of sexual dysfunction, including erectile dysfunction (ED). But the good news is that treatment of thyroid disorder at least partially reverses sexual dysfunction8. Thyroid hormone also affects fertility, ovulation, and menstruation9.

What hormones does the thyroid gland produce? In the following, we will discuss three tests for testing thyroid function – thyroid stimulating hormone (TSH), free T3, and free T4. You will probably want to make these tests part of your early diagnosis program and get them done regularly.

Thyroid stimulating hormone is a hormone that stimulates the thyroid gland. It is also known as TSH and is a glycoprotein hormone produced by the anterior pituitary gland. It is the main stimulus for the production of thyroid hormones. The TSH screening test is the first line test for suspected thyroid disease.

According to the American Thyroid Association, TSH levels are typically between 0.4 and 4.0 milliunits per liter (mU / L). However, these ranges will vary among laboratories and the upper limit can be raised from 4 to 5. If your level is higher than this, you are most likely to have an underactive thyroid gland. However, some studies show that this range should actually lie within 0.45–2.5 mIU / L. This is because TSH below the upper limit of the normal reference range poses an additional risk of progression to overt hypothyroidism over time1011.

So, high TSH levels indicate that your thyroid gland is not producing enough thyroid hormones. This condition is called hypothyroidism, which we wrote about above. Low TSH levels, on the other hand, may mean that your thyroid is producing too much hormone, the condition is called hyperthyroidism. Hyperthyroidism can be caused by Graves’ disease. This is a condition when your body’s immune system attacks the thyroid gland. It can also be a result of too much iodine in your body.

T3 (triiodothyronine) and T4 (thyroxine) are the two key thyroid hormones that are produced by the thyroid gland. The main product of thyroid secretion is T4, while T3 is secreted only in small amounts12. However, the activity of T3 is three to four times higher than that of T4. Nonetheless, both hormones play a vital role. Both T3 and T4 contain iodine. And it is iodine that is one of the main building blocks of both hormones. So let’s talk about tests that help measure the content of these hormones in the body.

If your results show high levels of total T3 or free T3, this could mean that you have hyperthyroidism. High T3 levels can lead to unpleasant symptoms such as rapid heart beat, insomnia and anxiety. High T3 levels also can harm the heart and the bones.

Low T3 levels may mean you have hypothyroidism. Typically, the T3 test results are often compared to the T4 and TSH test results. This helps to more accurately diagnose thyroid disease and understand whether the disease is primary or secondary. Primary hypothyroidism is most common; it is associated with thyroid disease and high thyroid-stimulating hormone (TSH) levels. Secondary hypothyroidism is less common; it is associated with a disease of the pituitary gland or hypothalamus. The TSH level will be low.

So, if we talk about the role of triiodothyronine, then it regulates the rate of oxygen consumption by tissues, and also stimulates protein synthesis, gluconeogenesis and glycogenolysis (which leads to an increase in the concentration of glucose in the blood). It is also responsible for lipolysis and intestinal motor function. In addition, triiodothyronine enhances catabolism and excretion of cholesterol with bile, promotes the synthesis of vitamin A and the absorption of vitamin B12 in the intestine, bone growth, and the production of sex hormones.

A normal total T4 level in adults ranges from 5.0 to 12.0μg/dL. As for free T4, the normal range in adults is 0.8 to 1.8 nanograms per deciliter (ng / dL) or 12 to 30 pmol / L. In general, high thyroxine T4 levels (as well as total T4, free T4, or free T4 index) may indicate an overactive thyroid gland (hyperthyroidism). A low level may indicate an underactive thyroid gland (hypothyroidism).

Just like in situation with T3, doctors don’t only look at your T4 level, but also at your TSH level to diagnose hypothyroidism. So, if TSH> 4.0 / mU/L, and the T4 level is low, then this is hypothyroidism. However, if your TSH is higher than  4.0 mU / L and your T4 level is normal, then your doctor will most likely suggest testing your serum thyroid peroxidase antibodies (anti-TPO). If these antibodies are present, it may indicate an autoimmune thyroid disorder, which is a risk factor for hypothyroidism13. In this case you will be advised to take a TSH test at least once a year.

Higher T4 or lower TSH levels are known to be associated with an increased risk of dementia14.

In addition to the two hormones described above, there is another hormone produced by the thyroid gland. It is called calcitonin. Calcitonin is produced by C cells and is involved in calcium and bone metabolism.

The role of the pituitary gland

👉Thus, there is no uniform recommendation on the need for screening for thyroid hormones!15

☝️For example, the American Thyroid Association recommends TSH screening for all adults over 35, with retests every 5 years. However, AACE recommends routine screening for TSH in elderly patients regardless of their age. But the USPSTF still discourages routine thyroid screening in non-pregnant adults.